In designing the art “the illusionist/houdini” for our collection, I wanted to specifically showcase two opposite ideas: the handcuffs and chains Houdini wore so often in his performances; and the illusions that provoked such awe and wonder in his audiences. One idea is heavy and restrictive; the other is light and ephemeral. I knew mixing the two thoughts would be a challenge, so I focused on repeating a simple image and incorporating specific colors.

I kept returning to the tricks and apparatus of the magical community of Houdini’s era. The magicians (including Houdini) often worked with mirrors, and constructed tricks using prisms—these were the tools and techniques that resonated with me. I visualized Houdini, on stage, handcuffed and weighted down by irons. In my mind’s eye, he looks up at the audience with an inscrutable expression, then splits into colors, transformed into wavelengths of light slowly disappearing from the stage. Mirages of pigment wink out one by one into darkness.

The art “the illusionist/houdini” is also a shout-out to the CMYK process, which is often used to describe the printing process itself. When artfully mixed, cyan, magenta, yellow, and black inks are the base from which all other colors can be created. We worked with the printing team to accentuate the hand-printing of these garments. As the wet inks were pressed into the cloth, the spaces where the inks overlapped created new colors, and the fission of that overlap really set off the design, highlighting Houdini’s eyes and those chains wrapped around him. 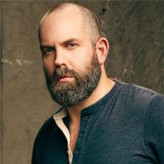